Europe is now home for 7,034 tech scaleups and the ecosystem is growing, according to the “Tech Scaleup Europe 2019” Report, presented today at the Residence Palace in Brussels at the presence of EU Commissioner Carlos Moedas.

“It’s great to see that our efforts to get Europe back in the lead in global innovation are starting to pay off with strong growth in both startups and scaleups. This paints a picture of a European ecosystem which is not only catching up with other regions but also charting its course towards success”, commented Carlos Moedas.

However, the scenario truly changes when looking at the scaleup density and scaleup investing ratio*. With respect to these 2 indicators, Silicon Valley unsurprisingly shows the highest scores with 83.3 scaleups for every 100k inhabitants and with 60.7% of GDP invested in scaleups. Israel’s ecosystem ranks 2nd with 13.6 and 5.6%, followed by US with 7 and 3.6%. However, China is lagging behind with 0.7 and 1.3% along with Europe with a 1.2 score (an increase from prior year’s score of 1) and 0.53% (again an increase from prior year’s 0.45%).

“It comes as no surprise that Silicon Valley is truly a solo runner with ratios incomparable to those of Europe. More than half (61%) of the region’s GDP is invested into technology” commented Alberto Onetti, Chairman Mind the Bridge and SEP Coordinator, adding that “Israel’s data are impressive. This small 8 million population country scores better than Germany and France in innovation. Also, the Chinese dragon has definitively awakened. Since 2014 investments towards tech scaleups in China has moved by an order of magnitude and now are 2.5 times higher than that in Europe. The good news for Europe is that we, finally, spotted a sustained growth pattern. However, the gap with the US and China remains huge.” 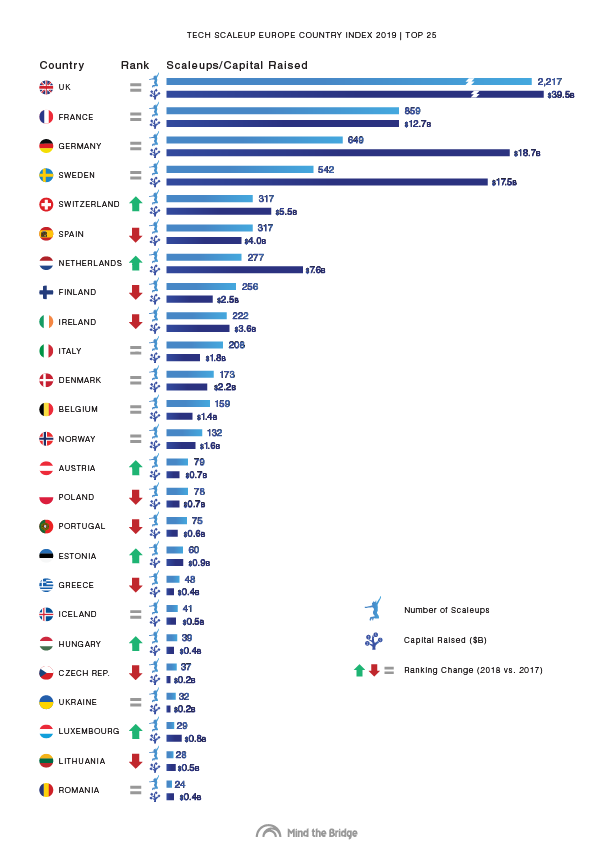 According to the Country Index 2019, the UK continues to lead the pack, adding 519 scaleups to its population for a total of 2,217 (32% of the total) able to collect $39.5B (31% of total capital invested into European scaleups), evidently unhindered by  Brexit talks. France follows it with 859 scaleups and raise only $12.7B, while Germany with 649 collected $18.7B and Sweden with 542 collected $17.5B. These three countries combine for a total of 53% of the scaleup population in Europe. Spain ranks 6th in terms of the number of scaleups, after Sweden and Switzerland, Italy is 10th, Denmark 11th, Belgium 12th. Considering the capital raised: Sweden is hopping France and the Netherlands while passing Spain and Switzerland. This is the most noticeable change since last year. The oversize IPOs of Spotify ($9.2B) and Adyen ($1.1B) impacted this result.

The Report even provides in-depth details as to who contributed the most in the innovation economy, by crossing the two metric “Scaleup Density Ratio” and “Scaleup Investing Ratio” in the Scaleup Europe Matrix.

The countries in the top right quadrant characterize many scaleups and a large amount of financing (both above the European average), like the Nordics, Switzerland, the Netherlands, the UK. The low left-hand quadrant includes countries (such as Spain, Portugal, and Italy) that underperform compared to European average values. France and Germany are quite closer to the Europe’s average with some differences in the scaleup population.

“Analyzing the matrix movements of countries along the years, we observe convergence to a linear distribution. Emerging countries typically move up initially rather than right. Then, the policy recommendation is to focus on creating startup champions rather than enlarging the base by spreading capital among multiple companies”, commented Marco Marinucci, Mind the Bridge CEO.

Three-fourth of the capital comes from Venture Capital.

The capital raised through IPOs doubled

However, 2018 seems to be a turning point as $13.7B was raised by European scaleups through IPOs last year, doubling more than the overall amount secured in the prior year.

… while ICOs provides 4.6 times higher capital. Moreover, they are faster

In 2018 4.3% of European scaleups have completed an ICO and the capital secured more than doubled ($4.8B). ICOs have proven to be a fascinating substitute for the first round of financing for tech scaleups in countries such as Croatia, Slovenia, and Serbia, where over 90% of capital raised comes from ICOs. The ICO channel provides 4.6 times higher capital (an average of $24.2M) than the generic series A backed by traditional VCs ($5.2M on average) and proved to be much faster. Concerns about the ICO instrument remain (money raised through ICOs is not necessarily fully available to the company and it is exposed to potentially relevant price fluctuations: average depreciation of cryptocurrencies has been over 40%).

“The startup business is international by nature. No surprise that domestic investors contributed “only” for 28% of the funding of scaleups. More than 40% still comes from outside Europe: 26% from US investors, 8% from China (more than double compared to 2017) and 3% from Japan.” concluded Alberto Onetti.

In 2018, 50 out of 184 European scaleups raised a capital over the $100M bar and turned into Scalers. Of those, 55 come from the UK, 30 from Germany, 20 from France, and 16 from Switzerland. They cumulatively raised almost $63.4B equaling nearly half of the total capital made available to European tech scaleups. There are 11 so-called “Super Scalers” who raised more than $1B in funding hailing from Germany, Netherlands, the UK, and Sweden.

Industries: Fintech is the largest

Fintech thus far has been the largest industry in Scaleup Europe with approximately $7.1B in total i.e., 50% higher compared to last year. Cyber Security, Energy, and Cleantech are the fastest growing with roughly $3B new investments in each. MedTech is at $1.9B tripling the capital raised in 2017, while Emerging industries e.g., InsurTech, AutoTech, and Industry 4.0, are gaining momentum.